Relaunch Takes Off In Style!

I may not have the best mathematical mind words rather than numbers mean alot more to me but when I heard that Steve Cole has written 45 books in 5 years and that over 2 million copies of the Astrosaurs series have now been sold even I was stunned by such numbers!
Such is the success of the series that Steve Cole created just a few years ago that last night, despite the rain, a group of adult fans and friends joined Steve and his RHCB cadet team to celebrate his achievement, see the Astorsaurs books with bright new covers and get a sneaky preview of a brand new series. 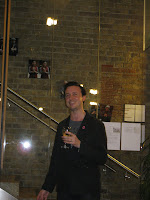 It seems that Steve Cole is unstoppable for this year he will launch Slime Busters a new series whose tag line is Fighting Crime with Slime! There will be the second book in the Z-Rex series for older readers and his very first picture book too. This is an author whose imagination knows no bounds and who throws himself with great enthusiasm into all aspects of his work. Steve was as stunned by the numbers as the rest of us, was enjoying a great party and was particularly pleased to have met Woody Fox, the talented illustrator of his books who had come up all the way from Devon.
Thanks go to Steve for a brilliant series of books and yet more to look forward to and also the team at RHCB for finding him, keeping him and letting us all in for a sneak preview of some exciting new stories to come this year.
Posted by Unknown at 15:30 No comments:

Today I took myself and my somewhat reluctant husband to a second hand book fair. Whilst the draw for me was the books it was also the records, I love my old fashioned vinyl and in the same way I love my old books. New books to are quite a draw so I has a very happily occupied browsing, picking up lots of books for a good look and it was great to see lots of families and children there too – also picking up and enjoying the touch and feel of the books as well as the stories and information that they were finding in them. 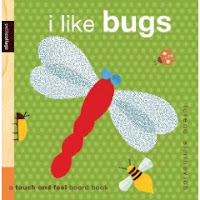 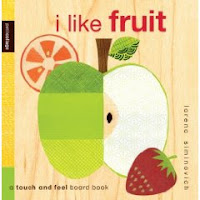 This brings me very nicely to the topic of today’s Blog which is touch and feel books. Once again I have been relearning the pleasure of books that provide the opportunity to interact and learn at the same time. Inparticular this week I have been looking at two titles in anew series from Lornea Siminovich. The series is Petitcollage and the two books are ‘I Like Fruit’ and ‘I Like Bugs’. They are specifically designed for sharing with babies, the first introduces not only fruit but also colours. Red, Green, Yellow, Orange and Blue are the fruits, each double page spread divides its first page into four squares, one with the colour and three with the fruit whilst its facing page features a collage picture of the fruit of which one section has been cut away to reveal a touch and feel patch. In the Bugs title children are encouraged to count as well as learn about bugs. They can count up to five, discover some fascinating looking bugs from a dragonfly to a beetle and some very fluffy bees. There are beautiful pictures made up of many colours and patterns to look at and certainly a lot to learn! The collage nature of the pictures provide different patterns and designs to look at in the Fruit titles whilst the Bugs titles does this and also gives children simple images of gardens and plants to pour over. The bright, vibrant and interactive feel of these books will be certain to charm and entertain little eyes, minds and hands for many hours!

Once children have learnt how much fun it is to have some interactive fun with books then why not think about introducing them to ‘Funny Felt Animals Faces’. I had great fun making up silly faces for Lion, Giraffe, Elephant, Monkey and Parrot! It felt very retro too for I remember having hours of fun playing with Fuzzy Felt as a child! You can follow the instructions built into the text of the simple story and make the faces fit or have fun and play around making up your own pictures. This book assures children that they can play with their books as well as read and learn from the text. It provides a wonderful opportunity to have fun and learn without perhaps realising it!

Now I must go and have some more fun, listening to audio books but I will leave you with the suggestion that you go out and find some fun books to interact with or share with some little ones, rekindle a love of books for fun as well as learning and then perhaps share with us all at Armadillo anything you have particularly enjoyed.

Books of Love and Flowers for Valentines'

Valentine’s Day is a time to celebrate love; it is usual to find gifts of flowers and chocolate from a loved one on such a day. How often are any of us given books – would we even consider a book on a day of love? Well if the answer is no then I would urge you to rethink after all we have all fallen in love with a book and often declare how much we love to read so why not consider giving a book as an expression of love? Rather than the usual gifts from husband to wife, boyfriend to girlfriend and so on, why not think about giving a child a gift on Valentine’s Day, after all we love them too. I have found two books perfect for sharing on Valentine’s Day, books that will be loved by children and adults alike. The first is Love-A Duck written by Alan James Brown with illustrations by Francesca Chessa and published by Meadowside. It is an adorable story of one little yellow duck, Love-a-Duck, and his bath-time companion Jane. Love-a-Duck has lost his squeak and when he inadvertently falls out of the bathroom window he sets out on an exciting adventure to find it again and to discover just how special he really is. A simple and charming story to share with bright, vibrant, solid and simple illustration to charm the youngest reader at bath and bedtime this is a warm, witty and loving story with delightful illustration. 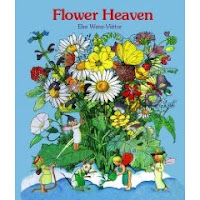 For older readers, young listeners and I would certainly say adults too I suggest Flower Heaven by Else Wenz-Vietor, published by Floris Books. With its solid hardback, red spine binding and flower-fairy-esq front cover illustration this book has a wide appeal before the pages have even been turned. It tells the story mistreated flowers who have found their way to Flower Heaven where they are tended, nurtured and kept safe by the gentle flower angels. Taking place over just one evening there are snipped roses, de-petaled daisies and thirsty garlands. Over the course of the evening the flowers tell their tale and the angels tend to their patients. This charming, simple and slightly old-fashioned story presents the flower’s point of view and gently explains to the young listener how they might perhaps better care for the beauty and bounty of the nature around them. As I say a book for children and adults alike.

Both titles would make charming gifts of love on a Valentine’s Day and charming reading all year round. Share the gift of love as often as you can with a book.

This week has been great fun because I have been playing with novelty children’s books. Often I am asked why I have these books and what use they are – the answer is that I think it is very important for interactive books aimed at babies (and their parents) as well as toddlers are given reviews. Anyone with young children will know how difficult it is when entering any bookshop to decide between the sheer mass of books that have been created for this group of children, but being able to find out what even a small selection of them are like is very important. 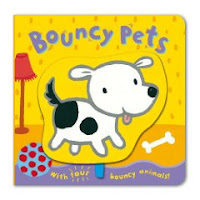 This brings me to ‘Bouncy Books’. There are four books in this charming series, Jungle, Garden, Pets and Farm. Each book introduces children to four associated animals. Collect the series and children will have an understanding of 16 animals, they will learn what they are called and where they live, they will also get the opportunity to play with the books for the animals in these books bounce! It is great to be able to interact with a book, look at the pictures, play with them and have a learning experience at the same time. Fun, entertaining 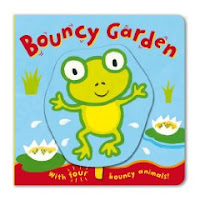 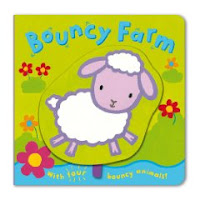 and educational these are a great set of books. 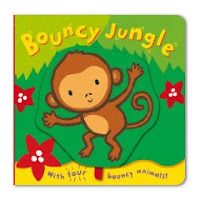 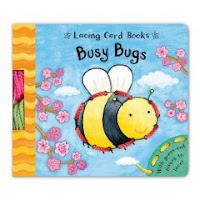 Bugs, two books in the new ‘Lacing Card Books’ series. These books come with press out pieces that need lacing. They are certainly for the older toddler; 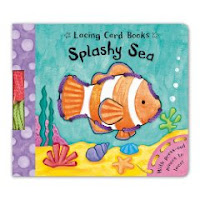 perhaps those starting school needing to learn co-ordination skills. They are however great for any children (or adults) who want to practise their manual dexterity skills! Wonderfully vibrant pictures combined with interesting facts that have been written with the young reader’s education in mind combine to create another set of must-have fun books.

Revitalise your own and your child’s relationship with books by testing out some of these fun, lively and refreshingly different interactive, educational offerings.