We are lucky to have the brilliance of the author Sally Gardner in a guest spot today.

Perhaps not so in person, but fittingly, here is a sample of Sally Gardner, a sample of the first chapter of 'The Double Shadow' her haunting, moving and compelling new novel.

Sally will feature in the winter edition of Armadillo, coming to a web page near you in a matter of weeks. For now enjoy this sample of her brilliance and then go on out and get the book for yourself and be enthralled ...

Once there was a girl who asked of her reflection, ‘If all I have is fragments of memories and none of them fit together, tell me then, do I exist?’

There was no answer, only the silence of the room and the hum of the green light that oozed from the television in the corner. She had no idea how long she had been standing there, maybe an eternity. Her name, her age, beyond recall. All she knew was there would be no tomorrow if she couldn’t work out the riddle of yesterday. She wondered often if she was going crazy, but it was hard to remember what crazy looked like. In the apartment, on the windowsill before her, lay a dead butterfly. Its wings and its beauty disturbed her. It was familiar, it had an echo of another time.

Softly, she sang a few words, her breath misty on the cold night-time glass, her reflection the only silent proof of her existence.

If you go down in the woods today

You’re sure of a big surprise.

If you go down in the woods today

She was certain there were more verses but, like so much, they twinkled on the brink of things lost.

High up in a dark tenement block, the girl looked out of the window to a wasteland. In the middle stood one building. A picture palace. She imagined that once it must have been fabulous, with its mirrored facade built of thousands of reflective squares. How it came to fall into such decay was a mystery. As so much here was. The girl could see that the movie house had three grand silvered steps leading up to diamond-paned glass doors. Now all smeared with the grime of neglect. The place looked haunted, having scared away every other building that might have kept it company, leaving

it isolated. There, at the very edge of the world, the other buildings formed a protective circle, shoulder to shoulder, arm in arm, joining with rows of tall houses and one black tower to make an impenetrable wall, a mix of apartment buildings and tenement blocks whose fronts were laced with a spider’s web of fire escapes, water tanks and balconies. Behind this barricade she could see skyscrapers turning their Venetianblinded eyes away. There was no way out. This was landscape with no colour, no trees to break the endless monotony of grainy black and white, just the ever-present eerie hum of the green light. It was this light that, in the darkness, filled her 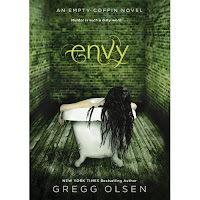 At last – a proper murder story for YA readers – no vampires, no werewolves, but just a little bit of something slightly spooky! I’m a long-standing murder story fan, and I was gripped from the first page to the last.

The book is Envy, the first in a series of thrillers about Port Gamble, or Empty Coffin, as its original name translates. The author is Gregg Olsen, an American writer with several novels for adults as well as real-life crime books to his name, who sets his books in an area he knows well, the Pacific north-west, and one probably little known to British readers. Here he makes full use of the rather British weather to create a damp, cool, dark environment in which dark deeds somehow seem so much more chilling!

Hayley and Taylor Ryan are twins with a special gift, which provides them with that little bit extra when they search out the real story behind crimes. We are promised that they will appear in more Empty Coffin stories, and the first chapter of the next instalment is tantalizingly added as a postscript to Envy. As five-year-olds they suffered the trauma of a coach accident on the bridge nearby their town, an accident from which killed some of their classmates, and which has scarred the community ever since. Ten years on, it appears that another survivor, Katelyn, has taken her own life, but the twins’ determination to find the truth uncovers some deeply disturbing incidents, and some even more deeply disturbed inhabitants of this sleepy town.

This is really good stuff, with a thrilling story and convincing characterisation, and it also has some serious messages underlying the narrative, about envy, about friendship, about revenge, about mental health and bullying, especially particular type of bullying which is on the increase among young readers: cyberbullying. The invasive nature of this, often totally unexpected, and preying on the hopes and fears of the recipients, makes it particularly vicious and private, and it eats away at the self-image of anyone who falls victim to it.

Knowing that his readership will spend much of their time glued to their computer and their smartphone, Olsen has a website devoted to Empty Coffin, and to Envy with additional material. There’s also a link to advice, discussion and resources about cyberbullying. He also outlines the real-life cases behind Envy, and links to find out more about those. I can’t wait for the next book, and I’d recommend it to anyone who likes a well-written mystery with a twist in the tale!

With huge thanks to Bridget Carrington, Armadillo Reviewer, for this Blog contribution -ed