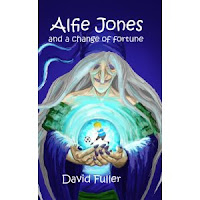 We begin with an excellent independently published book. Alfie Jones and a Change of Fortune by David Fuller (RDF Publishing 2011).
A winner! As we’ve discovered before, books from independent publishers and those which are self-published are a very mixed bag, and those publishers can get very aerated if their product is adversely criticised! David Fuller’s Alfie Jones and a Change of Fortune shows just how good independently published books can be.

Alfie is nine years old and his passion is football. He has always loved playing for Kingsway Colts, where he is one of their stars, but when their elderly coach is taken ill, his replacement is only interested in promoting his own son, Jasper. Jasper and his father are bullies, and Alfie is, quite literally, sidelined for every match. Luckily, he meets a mysterious fortune-teller, Madame Zola, who helps him beat the bullies.

This book is great fun, with plenty of excitement and humour, ably assisted by Rob Smyth’s illustrations. But it has very serious undertones, showing how adults as well as peers can bully children, and the effect this can have on the object of this bullying. Although Alfie is supported by his friends, he isn’t by his parents who, although they are not unkind, have no interest in Alfie’s passion for and skill in football. Instead they support Alfie’s sister’s passion for dancing. There are also positive elderly characters: Jimmy Grimshaw, the old coach, and Madame Zola, untidy, scatty, but the catalyst which empowers Alfie to outwit the bullies.

This is an excellent chapter book for primary school readers, to which boys will relate, and we look forward to reading many more of Alfie’s adventures.

Moving on to a retelling from an established and popular author Bridget read Shahnameh: The Persian Book of Kings, retold by Elizabeth Laird, illustrated by Shirin Adl (Frances Lincoln 2012). 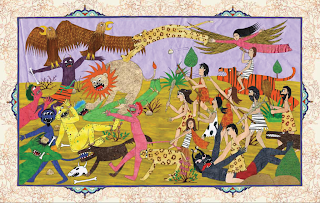 Elizabeth Laird is passionate about bringing young Western audiences an understanding of the people, customs and culture of the Middle East and beyond. Shanameh is an epic poem written more than a thousand years ago, which relates the myths and legends which tell of the beginning of Persia – modern-day Iran – and which have formed an oral tradition in those lands.


The stories tell of the lives, loves and adventures of the kings, heroes, princesses, magical animals and demons.


Laird has retold them perfectly, retaining the poetic lilt within a translation which will engage young readers. Shirin Adl’s illustrations accompany the text perfectly, with full page modern, slightly quirky, representations of typical Persian art, and every page bordered by flowers and creatures which echo the atmosphere and ethos of the stories. This is a beautiful book, in content and in presentation.


Finally Bridget shares her thoughts about a book translated into English by Anthea Bell but originally from the pen and imagination of the hugely talented Kai Meyer, Arcadia Awakens (Templar 2012).

A curiously mixed set of genres are found in Meyer’s YA novel, where Rosa, an American teenager recovering from an abortion resulting from a gang rape, returns to her Mafia family roots in Sicily. Here she reluctantly falls in love with the son of a rival clan, and discovers that, in common with the rest of each family, they can shape-shift into a snake (Rosa) and a tiger (Alessandro), a legacy from their Arcadian ancestry. Thereafter they battle various odds, human and supernatural.


Meyer paints a competent picture of the Sicilian landscape – though that may owe something to my currently watching Montalbano – but the characterisation is less convincing. Myth – the Arcadian element – legend and Bond-style thriller combine in the first novel of a projected trilogy which will undoubtedly captivate a teenage audience which enjoys fast-paced adventure, fantasy, romance and angst.

We hope you will find the time to enjoy one or more of these titles for yourself.